Angel Orensanz
Leave a comment
ANGEL ORENSANZ, by Calvin Reid
A respected artist for more than 40 years, Orensanz has produced a body of work ranging from large abstract sculptures with humanist overtones to a series of conceptual installations and performances that whimsically address social and geopolitical conflict.

The latter works invoke his own brand of pacifism idiosyncratic vision of a multicultural, interdependent world community. Angel Orensanz has done a series of quirky public performances. Beginning in 2001, the performances were conducted in Venice, Florence, Tokyo, New York City, Berlin, Madrid, Paris and elsewhere.
They offer a personal response to the specter of war and suffering. These acts most vividly embody the artist’s engaging sense of transnational fellowship and spiritual introspection. Orensanz constructed a large, man-sized transparent plastic sphere that he rolled through the streets of these legendary cities — sometimes pushing it along from behind, sometimes walking inside the giant globe and moving it forward. He loaded it on a gondola and traveled the canals of Venice; at other times the sphere was parked in historic locales such as Piazza San Marco or at the Brandenburg Gate. While the sphere is on view Orensanz and the people he encounters paint and mark up its surface. 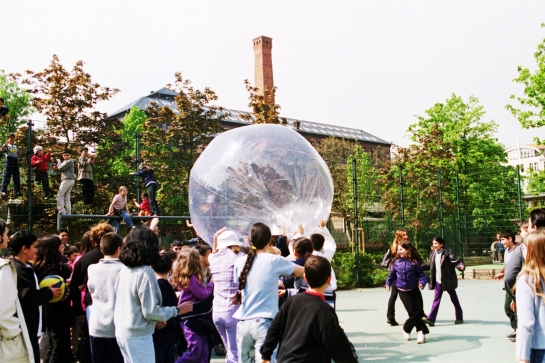 The portable globe is like a giant existential snowball that grows metaphorically larger as it picks up layers of historic and symbolic grit and grime. In his catalogue essay, Thomas McEvilley provides a brisk and lucid examination of Orensanz‘s work and the history of the Norfolk Street center and points to the significance of the sphere in classical Greek philosophy.

Orensanz is out to metaphorically link his personal and ancestral wanderings to the great international venues of human civilization. Hanging in the venerable Norfolk Street building, his work evoked yet another revolution — it reconnected the historic transit between the old world and the new embodied in New York‘s Lower East Side. Orensanz offers himself as a kind of shambling figure, a delightful modern Sisyphus relentlessly pushing a scarred and sagging globe through the miseries and triumphs of human history.
— Calvin Reid. February 2003
Calvin Reed is an art critic for “Art in America“, where this piece appeared in February of 2003.
September 12, you will be able to enjoy Angel Orensanz works in the Angel Orensanz Foundation!

Daily chronicle of the art world for artists, gallery owners and collectors